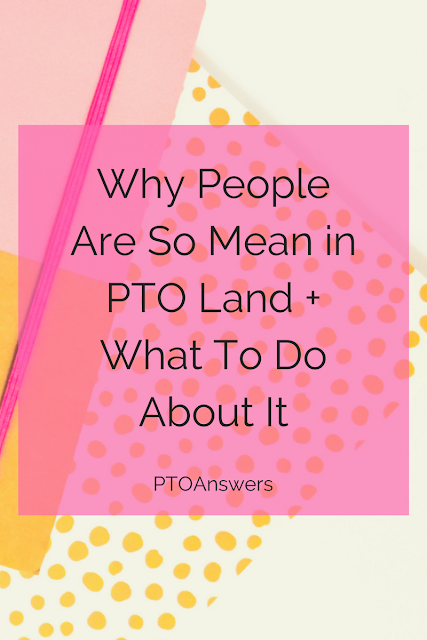 As a long time PTA volunteer, there’s one question that nags at me…  why in the world are people so stinking’ mean in PTO Land?  And why are these mean people so difficult to work with?

I’ve been doing this a long time.  It’s been really fun at times… like when my 12 year old hugged me and told me that all of my hard work paid off right after the 6th grade dance I coordinated.

And then there have been some rough times…

Like the time that a parent rattled off about a dozen things she thought the PTA could or should be doing in pretty rude and demanding tone.

And the other time when the new PTA President passive aggressively excluded me from the group and made me feel like my ideas weren’t valuable or wanted.  Yep.  Those are the times that I’d like to forget in a nano second because they sucked big time.

There are many more moments like this that I care not to recount because I know you know what I’m talking about.  You’ve been there.  We’ve all been there together.

But the thing I’ve come to realize, and what is crucial for you to realize too, is that all of this was Never.  About.  Me.  And it’s never going to be about you because you’re not a jerk, right?

It was all about them and their insecurities and feelings of inadequacy and whatever is going on in their lives.  For the know it all mom (who’d never been to a PTA meeting that I’d ever attended), she was likely feeling bad that she couldn’t be more active.  She mentioned that she worked full time about a dozen times in our 3 minute conversation.

It’s always easier to talk the talk instead of walking the talk.  And so most people will do just that.  Talk.  And not have any action to follow it up with.

The new PTA President?  Turns out she was completely insecure and took any suggestion as criticism, when that’s totally wasn’t the intent or the tone.  But I digress…

What to Do Instead

The next time someone is mean or rude to you in PTO Land, or where ever, stop before you respond!  And when you do respond, make sure it’s with kindness.

That’s right!  In everything you do, make sure you are kind.  Even when people don’t deserve it.

In fact, that’s especially the right time to do it.  Because odds are, that’s exactly what that person needs, whether they know it or not.

You never know what someone is going through- maybe they just had an argument with their husband.  Maybe they’re stressed out beyond belief and their taking it out on you.

It doesn’t really matter.  Cause you can’t control other people or even what they say or do.

Chances are you’ll be blessed by that kindness you put out into the world because what goes around comes around.

Think about this the next time someone is mean to you.  Then hit ’em upside their head with a huge dose of kindness.  They’ll never see it coming.