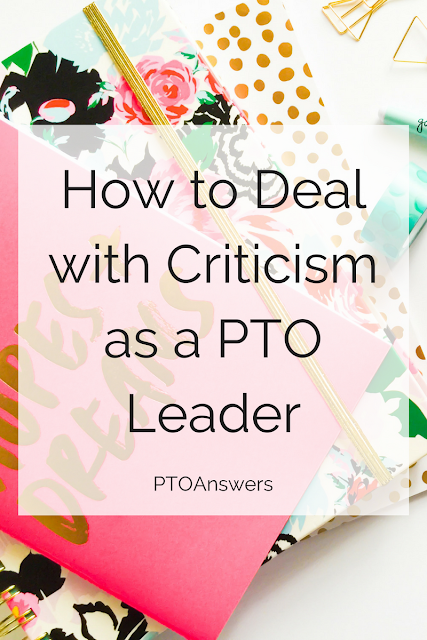 One of the very hardest things about being a leader is when someone is, shall we say… less than grateful for all of the many, many, many hours you devote to helping run the PTO!

It can really feel like a punch to the gut.  Ooof.

And what’s worse is that sometimes the criticism is actually spot on and highlights something that could be better.  Ugh.  That hurts big time.

Well, guess what?  It’s time to fess up to yourself that you’re only human.  A perfectly flawed person who is trying to do her best.

So don’t be too hard on yourself.

Lemme repeat that again.  Don’t be too hard on yourself.

No one is perfect.  Not even you there, lady.

Nope, no matter how hard you try, it’s not going to happen.  But that’s ok!

Seriously, do not beat yourself up about it or lay awake at night feeling bad about it.

Instead, pull up your big girl pants and take it.

This too shall pass and here’s why.

As a PTO leader, you’re doing so much more than most parents will ever do to give back to the school.

And that’s worth something.  A heck of a lot, in fact!

But, you’ll probably never get the recognition for all of your time and effort.

You might get an award or two and some public shout outs for all that you do.

And you’ll also get the gratitude of kids, parents, teachers, and administrators of the school.  All of your hard work is making the school a better place.  Isn’t that what it’s all about?

So the next time someone offers up some criticism, take it in, but not too deeply.

Remember this truth: A lot of times when people are critical of you, it can be that they’re projecting their own short-comings and self confidence issues onto you.  So it’s really not about you after all.

But even if that isn’t the case and it really is about you, you should aim to not take the criticism as a personal attack.

Look at it more objectively.  What part of the criticism is true?  What can you change?  How can you grow and resolve shortcomings?

Instead of feeling defeated, take it as a challenge to do better next time.

I know you can do it.  Rise up and overcome.  You’ll be a better person, and a better PTO leader as a result!

Now get on with your bad self and carry on!